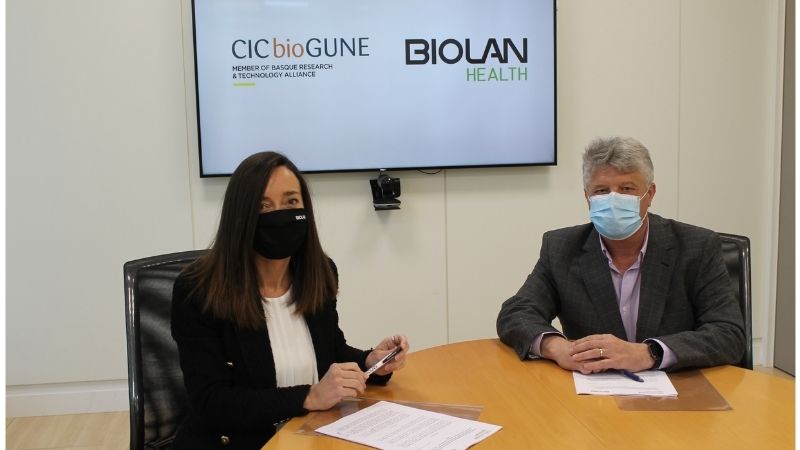 This collaborative action is part of a broader agreement reached between CIC bioGUNE and BIOLAN in areas aimed at disease diagnosis and other health applications.

CIC bioGUNE -a member of the Basque Research & Technology Alliance, BRTA- and BIOLAN have signed a collaboration agreement to exchange the knowledge necessary for the development, manufacture and commercialisation of a serological test in ELISA format (immunoassay techniques) to determine the presence of antibodies (IgG and IgM independently against SARS-CoV-2) and its emerging variants.

CIC bioGUNE will be responsible for the transfer of its own knowledge and technical assistance in the design and performance of immunoassays (ELISA), including screening and selection of the best commercial materials (such as ELISA plates, stabilisers, antibodies, etc.) for this purpose. The CIC bioGUNE team will also participate in the optimisation of immunoassays, according to the need for industrialisation, as well as in the design and execution of pilot studies and validation of serological test prototypes in ELISA format.

BIOLAN, through the BIOLAN HEALTH division, will be responsible for the industrial scale-up of the serological test in ELISA format for the detection of antibodies against SARS-CoV-2 and its variants. BIOLAN HEALTH will be responsible for ensuring and establishing the regulatory, commercial and exploitation actions for commercial use of the results of the project. The resulting product will reinforce BIOLAN’s contribution of solutions for the control of the pandemic derived from COVID-19, as the company has been commercialising a rapid serological test for the detection of neutralising antibodies against SARS-CoV-2 since January.

The agreement was signed by Jesús Jiménez, scientific director of CIC bioGUNE, and Larraitz Añorga, general manager of BIOLAN HEALTH. This collaboration is part of a broader agreement reached between CIC bioGUNE and BIOLAN, both located in the Bizkaia Technology Park, in areas aimed at the diagnosis of diseases and other health applications that require the analysis of proteins and compounds for use in medicine.