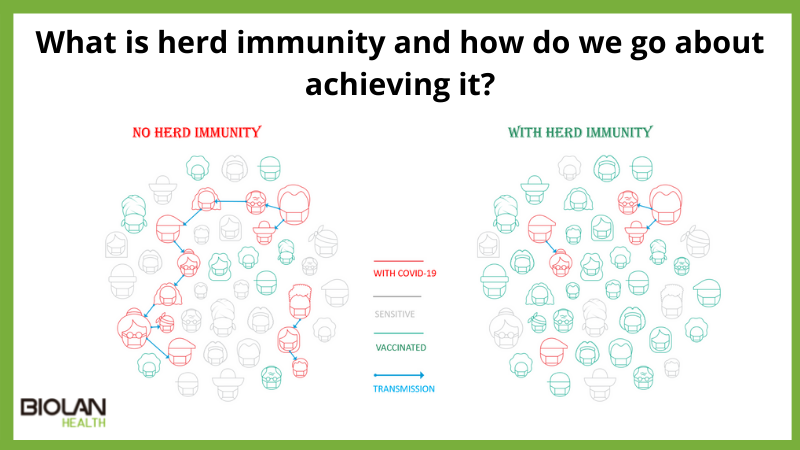 As the COVID-19 vaccination campaign has intensified in recent months, there has been much talk of achieving herd immunity before the end of the summer, but do we really know what herd immunity is?

Herd immunity, also called collective immunity or herd immunity, is a phenomenon observed in a population when part of it has become immune to a disease and the chain of trasmision between its individuals is interrupted, generating an indirect form of protection against the disease. Immunity can be acquired either by having passed the disease or by being vaccinated against it. However, the WHO supports the position of achieving herd immunity through vaccination, not allowing a disease to spread within a population group, as this would result in unnecessary cases and deaths.

For diseases that are transmitted from individual to individual, it is more difficult to maintain a chain of infection when a large proportion of the population is immune. The higher the proportion of immunised people, the less likely it is that a vulnerable person, i.e. a healthy, non-immunised person, will come into contact with an infected individual, and there comes a point at which the likelihood of disease spread is so low that the population is considered to have acquired herd immunity.

Immunised people act as a kind of firewall to the spread of the disease, slowing down or even preventing transmission to others. In this way, vulnerable people are indirectly protected by the immunised people. However, for this method to be effective, only a small proportion of the population can be left unvaccinated. In these cases, it is considered appropriate to leave unvaccinated those who cannot receive vaccines  because of age, health conditions, or other factors

However, what factors determine where this threshold population is to be immunised?

The main factor is the basic reproductive number, R0, of the disease. This number represents the number of people to whom an infected person can transmit the disease, or the number of secondary cases that each primary case generates on average (during the time it is contagious). But the basic reproductive number may vary depending on factors such as compliance with social distancing measures or the proportion of new circulating variants. Thus, the herd immunity threshold may vary between different countries or even regions within the same country.

Mathematically, the herd immunity threshold (the point at which the proportion of vulnerable individuals in a population is sufficiently low for disease transmission) is defined by the formula 1 – 1/R0, implying that the more transmissible a disease is, the higher the proportion of people who must be immune to block disease transmission. Thus, for COVID-19, an R0 of 3 (2.5 to 3.5) has been estimated, so the application of the formula implies that 67% of the population should be immunised. In addition, as the efficacy of the vaccines is not 100%, this implies a higher proportion of people who should complete the scheme to achieve herd immunity.

The target for achieving herd immunity is 70% of those vaccinated. However, this figure is not as accurate as we think. Each vaccine has a different percentage of effectiveness, something that should not be forgotten, and if we also take into account that a significant part of the