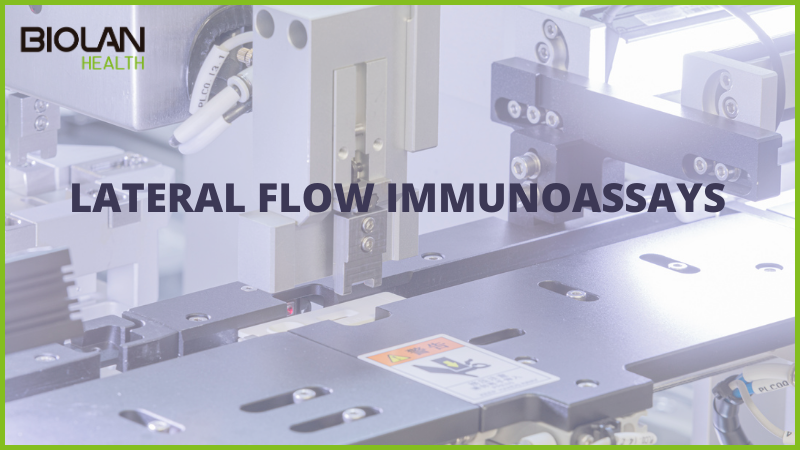 Lateral flow immunoassays (LFI) are based on the use of nitrocellulose membranes as a support for immunological reactions. They are tests used to detect the presence or absence of an analyte of biotechnological interest in a liquid sample.

Unlike traditional immunoassays, that involve the use of multiwell plates, high cost, complicated washing and sample preparation procedures, long detection times, etc., lateral flow immunoassays are portable, fast and easy to use, allowing the analysis to be performed off-site (Point of Care (PoC) devices).

They are widely used in the human health sector. Although nowadays, given their versatility, they are becoming increasingly important in the pharmaceutical, environmental and agri-food sectors, among others. But how do lateral flow immunoassays work?

Lateral flow immunoassays consist of a series of membranes of porous material that are superimposed on each other and attached to a backing card.

The test begins with the addition of the sample to the sample pad where it is treated to make it compatible with the rest of the test.

The sample mobilizes again the conjugate and interacts with the analyte when both migrate to the next section of the strip, which is the capture zone. In the capture zone, other biological components have been immobilized and deposited on specific lines of the membrane where they serve to capture the analyte and conjugate as they migrate along the test line (s). We can detect this visually with the appearance of a colored band. Likewise, control molecules are often involved in the migration, which in the capture zone are transformed into a colored band on the control line, indicating that the test is valid.

The excess of reagents pass through the capture zone to the absorbent pad.

Among the best known lateral flow tests are pregnancy tests or, currently, the rapid test for the detection of neutralising antibodies against SARS-CoV-2.

Rapid test for the detection of antibodies against SARS-CoV-2 performance.

In this case, the test consists of a nitrocellulose strip with two lines (IgG and IgM) and a control line.

When an appropriate volume of sample (blood/serum/plasma) is added followed by the test buffer to the sample well (S), the sample diffuses by capillarity across the test strip. If IgG or IgM antibodies against SARS-CoV-2 are present in the sample, they will interact with the SARS-CoV-2 conjugates to form the antigen-antibody complex. As the complex continues to migrate across the nitrocellulose membrane, it is captured by the corresponding immobilized antibodies (human anti-IgM and/or anti-IgG) forming a burgundy colored line (IgM or IgG line). This indicates a positive result for IgM and/or IgG antibodies against SARS-CoV-2.

The test also has a control line, which should appear regardless of color development on any of the test lines. If this is not the case, the test result is invalid and the sample must be retested with another test cassette.

Because of the optical detection method used, lateral flow tests are mostly qualitative assays. Many of the results are based on user interpretation. The user compares the color obtained on the test line with the colors on the “color card” provided with the kit.

However, for semi-quantitative or quantitative lateral flow immunoassays, new readers are being developed that allow the intensity of the band to be measured. These desktop or portable devices are gaining market traction and correlate the concentration of the analyte in the sample with this band intensity.